The seaside village of Paternoster, a huddle of quaint whitewashed houses overlooking a sandy bay, might be quite close to the great city of Cape Town yet down on the sands I feel a million miles away.

It can sometimes be wild, wet and windy in these parts but all that provides is a most welcome breath of fresh air after days negotiating the dusty, noisy chaos of urban sprawl.

Paternoster is less than two hour’s drive from South Africa’s “fairest city” yet it remains off the radar to the majority of foreign tourists to the Cape, few of whom venture north up the R27 highway beyond Melkbosstrand.

A trip up the Cape’s west coast is a journey into Afrikaans-speaking South Africa. Much of the local population is of mixed blood and many are descendants of the region’s original Bushman inhabitants. English is sparingly heard but widely understood.

The West Coast seems to be slightly out of sync with the rest of the country. While mountains and Cape wine remain part of this coastal experience they’e not dominant features. Instead, think wild flowers and fresh crayfish.

Fynbos is the name given the fine-leafed, shrub-like vegetation found in winter rainfall areas. The protea is the best-known example. Different species of plants flower throughout the year but the height of the West Coast wild flower season is between August and September, with the latter month the time of festivals and shows.

Paternoster is one of the country’s last remaining traditional fishing villages. Nothing much has changed here in the past century, with the obvious exception being the emergence of guest houses and seafood restaurants with crayfish the local delicacy.

Each night a small fleet of family-owned fishing boats heads out into the sweeping bay, hoping to return before the sun is high with a haul of spiny, long-legged crustaceans. Every morning these returning boats are greeted by locals and holidaymakers who’ve been strolling the strand in expectation.

A decent sized cray bought off the boats costs a sixth of what you’d pay in Cape Town. Or you can devour one at a restaurant beside the beach. Could you possibly be more of a locavore?

Paternoster is also home to the endemic Heaviside’s dolphin and it’s likely you’ll also see dusky dolphins. A colony of Cape fur seals lives among the rocky coves south of the village, as do African penguins and black oystercatchers. From June to December this splendid Atlantic coastline is known for whale watching, these visitor activities centred in nearby St Helena Bay. And with such an abundance of wildlife it’s hardly surprising that sea kayaking is so popular.

The age-old and headily aromatic Souk El Najjain spice market, tucked away amid the snaking alleys of Fes el Bali, is the perfect place to soak up the flavours, hues and differing shades of taste that together make up the zest of Moroccan culinary life.

Simply locating this souk is a great adventure. Fes el Bali is the name of the Old City of Fes, a bewildering maze of more than 9000 narrow lanes and cramped alleyways, slim arteries and dark passages that link the medina’s innumerable souks, fondouks and fountains, its mosques and madrassas, cafes, private homes, barbershops, workshops and tiny factories.

Before we enter the Old City gates my guide offers this sage advice: “Should you get lost, then look for an empty donkey and follow. It will be heading toward one of the four gates.”

Donkeys are the only means of getting goods into the heart of this maze and, once unloaded, they head out of the medina maze to fetch more stuff. 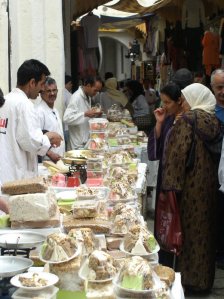 Fes is said to be the Arab world’s most complete medieval city and daily life within the medina is one of Morocco’s most fascinating spectacles. Scherazade could have gleaned 1001 tales every single day simply by standing on a corner observing all the activity.

Along one narrow lane I find bright woven textiles, rolls of delicate silks, coarse cottons, tailored shirts, kaftans, djellabas and embroidered blouses. Around another corner I’m ducking through hats and bags suspended from the ceiling.

Another alley is lined with nougat stalls. A winding lane has shops stacked with richly coloured and intricately patterned hand-woven carpets and rugs. Deals are being done at low tables over a glass of thé nana, the ubiquitous Moroccan mint tea. Brass lamps hanging from the eaves shed their soft light through panels of coloured glass.

I nudge my way past wooden frames stacked with babouches, those popular decorated Moroccan leather slippers with the long curly toes. I see shops filled with pottery, others with gleaming dishes of polished and engraved brass and tin. I inspect a cabinet filled with necklaces of chunky amber and silver as well as impressive Berber knives sheathed in scabbards of animal bone. 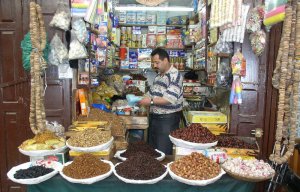 Across the way are the herb sellers flourishing large bunches of fresh mint, coriander, basil and parsley. Ropes of dried figs hang from doorways. Straw mats are strewn with garlic or onions and I see tables stacked with juicy olives, nuts, preserved lemons and dried fruits.

My journey through the Fes medina’s complex maze has led me to the heart of the Moroccan kitchen. I’ve spent hours exploring deep within an Aladdin’s Cave of goods and produce, one that hasn’t changed significantly since feudal times. Could travel possibly be more fascinating or rewarding?
Exploring Morocco

A long time ago Captain James Cook dropped anchor in the shelter of a bay on the east coast of what’s now called Australia and came ashore so he and the crew of HM Bark Endeavour could eat some fresh meat.

History has it that those ancient mariners feasted on plump, roasted bustard, and Bustard Bay is named after their historic repast.

Cook made his notes of that hot meal of bush turkey while sitting on the shoreline of what’s now the small community of 1770, named in honour of his May landing in that year.

I love the idea of those hungry sailors huddled on a beach devouring what for them would have been a gourmet feast. It fits so neatly into the modern-day Australian coastal holiday menu of endless golden sands and warm evenings of fine dining.

Such are my musings as I stroll the sands of this laid-back little corner of the Queensland coast. Before me and stretching almost to the horizon is a wide and mostly deserted beach backed by low dunes, sprouting grasses and the occasional tree.

There’s not a building in sight. Even the local surf club is hidden from view. I’m blessed with the wonderful feeling of being able to enjoy relatively untouched boundless nature.

The starting point for my beach walk is the hamlet of Agnes Water which has a small cluster of shops, several holiday homes, some holiday apartments and a museum yet, at its core, remains the small scale beach-side camping and caravan haven created by local farmer Tom Jeffery in the late 1940s. The campsite is often full, even outside the holiday seasons.

On the windswept point a few kilometres north is the community of 1770, consisting of a handful of holiday homes up on Round Hill, a popular pub with restaurant overlooking Bustard Bay, a shady camping ground beside the beach and a small marina and jetty for the ferry to Lady Musgrave and other southern Barrier Reef islands. Each year in May the community of 1770 stage a re-enactment of Cook’s landing as the central focus of their annual historic festival.

The past seems to be ever present in this area and especially in the campsites of both Agnes Water and in 1770 where it feels the 1970s never really left. More than once I hear people say “this is what Byron Bay used to be like”.

But nothing ever stays the same. Holiday villages and housing estates have sprouted between the two tiny communities, heralding a gearing toward bigger things. Local activities have extended beyond fishing and diving and these days are increasingly adrenaline-powered to satisfy thrill-seeking backpackers.

While it doesn’t necessarily follow that this area will inevitably become another Byron Bay, it’s not unreasonable to consider the possibility that the timelessness of 1770 – or even 1970 for that matter – will eventually and quite sadly become a thing of the past.