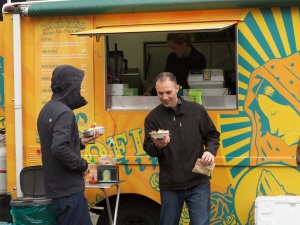 Food is always with easy reach on the streets of Vancouver, which may well be the food cart capital of the free world. My home town Sydney has followed slowly in its BC cousin’s footsteps in recent years and now has about eight trucks around town. In Vancouver there seems to be one on just about every corner.

Legislation allowing the expansion of colourful, tasty sidewalk dining was passed in 2010 and an expert panel now assesses all vendor applications. “It’s all about great food under 10 minutes and under $10”, says James.

There are more than 100 vendors, carts and trucks registered but not all are operating. Those that are can be most easily tracked down using the Street Food Vancouver smartphone app. 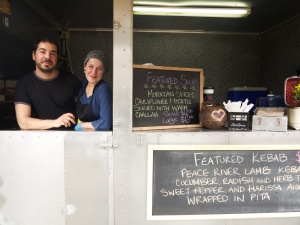 Most carts have fixed spots around the city’s core, particularly along Robson and Burrard streets, and these carts do an especially brisk lunchtime trade as hungry workers stream out of the surrounding office blocks.

Mobile food trucks can’t operate within the Downtown area but have the advantage of being able to pitch at prime suburban locations including beaches and provide food at events and private functions.

The food cart style of casual, impromptu munching seems to suit the times and everyone’s tastes. It’s popular enough that, at one time, it prompted some entrepreneurs to offer an “Eat your Cart Out” city tour during which punters sank their teeth into a range of sidewalk dishes such as slow-smoked pulled pork sandwiches, pan-Asian tapas, bacon every-which-way, short ribs, soups, tuna tacos, hot smoked salmon sandwiches, perogy, pupusas and fajita wraps. Burp! 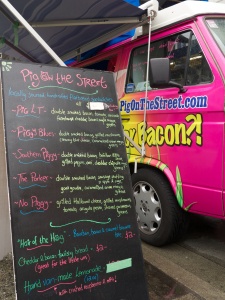 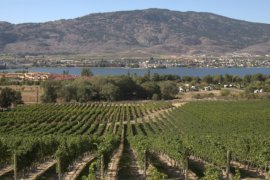 Whenever I travel in wine-producing countries I find there’s no better way of getting “beneath the surface” of my surroundings than seeking out and sampling the finest wines I can afford. So while in Canada I make tracks for the Okanagan Valley in British Columbia to sample “the best of the west”.

From the air I get a good idea of why the Okanagan is special. As our flight from Vancouver descends into the valley’s hub city of Kelowna I have spectacular views of silver water twinkling in the sunshine. Okanagan Lake spreads for 135 kilometres through a glacier-scoured landscape. It’s an amazing 230 metres deep at one point and is one of five interconnected lakes within the valley.

The Okanagan countryside is fertile, productive and diverse. Around the town of Osoyoos in the valley’s south is Canada’s only true desert. It’s the northern wedge of the Sonora Desert that runs all the way up from Mexico. The north of the Okanagan Valley is lush country with fabulous golf courses with green fairways flanked by majestic firs. And in between the valley’s two extremes are stone fruit orchards and British Columbia’s finest vineyards.

The wineries are nearly all small production. And because top restaurants in Vancouver, Montreal and Toronto snap up most of the finest wines, a valley visit is likely to be your only chance of tasting a range of styles – or even seeing some of the top drops. You can expect to pay $25 to $40 a bottle or a lot more for a particularly prized label.

The best-known Okanagan wine estates include Mission Hill, Cedar Creek and Burrowing Owl, But because two of these wineries are at opposite ends of the valley – a three-hour drive – it’s advisable to first decide which wineries you most want to visit and also, perhaps, stick to one region rather than try to see too much. 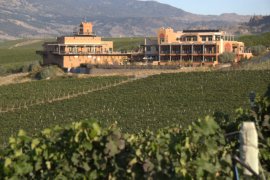 We stay a night at Burrowing Owl, in the valley’s south. In addition to truly superb wines enjoyed in the excellent restaurant, Burrowing Owl also has luxurious guest rooms beside a swimming pool. And while in the south, we also visit the nearby Nk’Mip Cellars, owned and operated by the Osoyoos Indian band.

Some of the finest Okanagan wines are found along the Naramata Bench, in the central valley Penticton region near Kelowna. The Bench is a stretch of high ground above Okanagan Lake’s eastern shore on which prime rows of merlot and pinot gris soak up the maximum amount of afternoon sunshine. The Kettle Valley Trail from Penticton provides fantastic views of the Naramata vineyards. 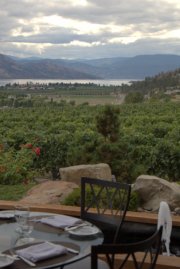 Mission Hill Family Estate in Kelowna is a no-expense-spared exercise in wine tourism. The estate is grand in every sense of the word. The bells in its iconic tower come from Annecy in France and first pealed over the Okanagan on the evening of December 10, 2000.

Mission Hill runs conducted tours, is on every tour bus schedule and hosts many special events. It’s probably the most commercial and tourist-oriented winery in the Okanagan.

I was soon seeking an antidote, something more intimate, and didn’t have to go very far to find it.

I heartily recommend nearby Quail’s Gate Winery as my top lunch choice in the central Okanagan. Not only does the restaurant have a spectacular view down the valley but the winery produces a truly outstanding pinot noir. It’s the essence of the Okanagan. What more could a wine lover want?